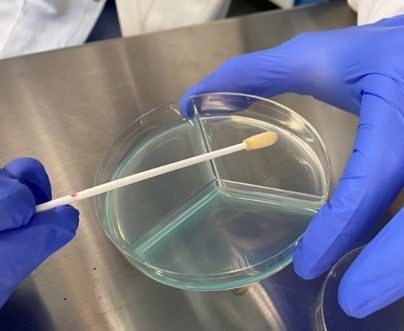 Streak all 3 compartments with specimen swab 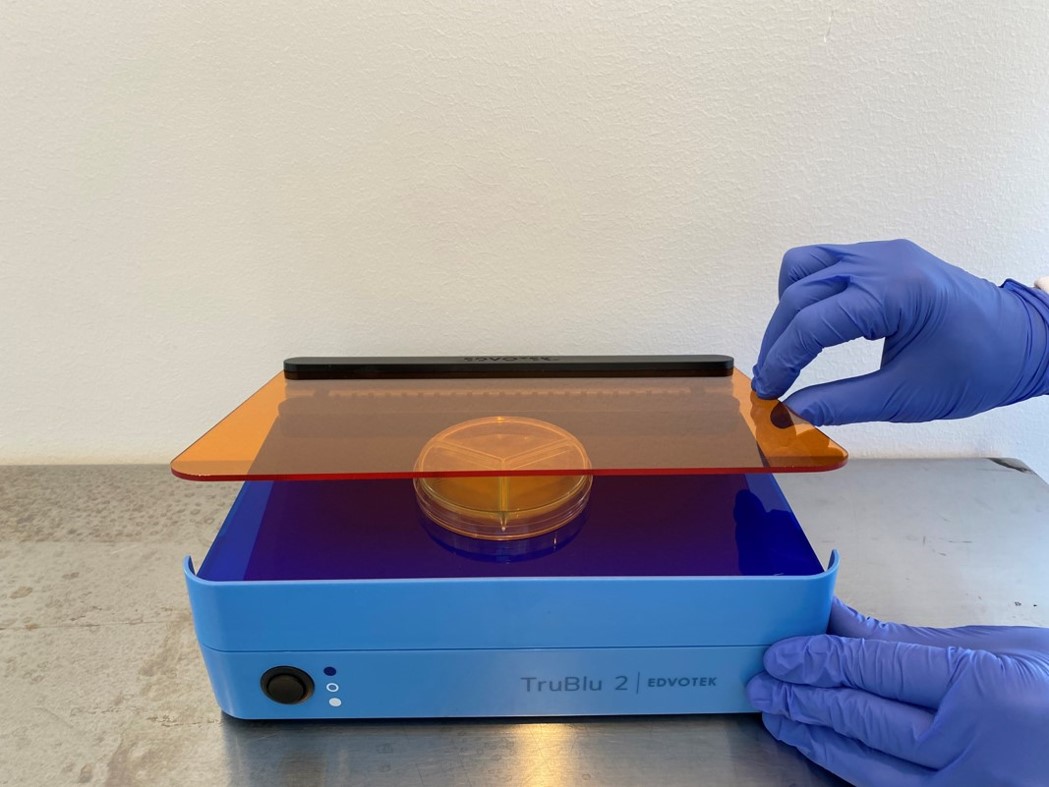 Product Overview and Intended Use

Product Overview and Intended Use

The NucAP™ Pyoderma Tri-plate (pictured below) is a next-generation rapid dual antibiotic susceptibility test for the predominant canine skin infection pathogens including S. pseudintermedius and S. aureus. The test combines the molecular power of bacterial enzymes and highly sensitive fluorescence detection to yield results in 8 hours, much faster than the 2-5 days needed for antibiotic susceptibility testing at off-site labs. Equipment needs include an incubator for culture plates and an inexpensive blue light box (for information on a limited number of startup kits that include tri-plates and a suitable light box, please visit our website: https://nptrapidtesting.com/ordering.html).

The Clind/Ox version of the NucAP™ Pyoderma Tri-plate enables susceptibility testing for oxacillin (determines methicillin resistance) and clindamycin. This combination provides susceptibility data for first-tier antibiotic therapies recommended for the most common form of canine pyoderma, including first-generation cephalosporins such as cefalexin and cefadroxil (which are effective against methicillin-susceptible S. pseudintermedius) and clindamycin (Hillier et al., 2014).

The procedural steps are as simple as inoculating the surface of the 3 chambers of the plate with a skin swab, incubating the plate at 37 ⁰C for 8 hours to overnight, and then viewing the plate on a blue light box . The fluorescence pattern that develops on the plate after 8 hours indicates antibiotic resistance or susceptibility of the Gram-positive pathogens that are most commonly found in these specimens.

Further development of fluorescence through 19 hours of incubation can provide more information, including susceptibility data on rare slow-growing S. pseudintermedius strains and coagulase-negative Staphylococci. The NucAP™ Pyoderma Tri-plate is currently recommended for dogs with clinical lesions resembling pyoderma (pustules and papules resembling bacterial folliculitis, and epidermal collarettes) and the cytological presence of cocci within these lesions.

Pyoderma is the number one reason for antimicrobial prescriptions in small animal veterinary practice (Hillier et al., 2014). The absence of affordable rapid antibiotic susceptibility testing for pyoderma and the slow turnaround times of off-site antibiotic susceptibility testing (2-5 days) have made empirical therapy for pyoderma a common approach. However, the high and increasing rates of antimicrobial resistance among bacterial pathogens that cause pyoderma are degrading the utility of empirical therapy.

The NucAP™ Pyoderma Tri-plate includes 3 microbial growth media compartments that are selective for Gram-positive bacteria. The media in compartment I also includes oxacillin while the media in compartment II includes clindamycin. The media in all compartments includes a fluorescence indicator of enzymes that are produced by Staphylococci. Fluorescence development depends on the ability of bacteria to grow on the selective media and to produce suitable enzymes. The high sensitivity of the NucAP™ Pyoderma Tri-plate enables robust detection of Staphylococci growth on selective media prior to the appearance of visible colonies. Coagulase-positive Staphylococci, including S. pseudintermedius, produce strong enzymatic activity, resulting in visible fluorescence in as few as 6 hours. The NucAP™ Pyoderma Tri-plate thus provides a tool for determining the antibiotic susceptibility status of high-impact bacterial pathogens such as S. pseudintermedius and S. aureus much faster than current alternatives such as chromogenic agars. Rare slow-growing strains of S. pseudintermedius and S. aureus, and various Gram-positive bacterial species that are less frequent causes of canine skin infections, such as coagulase-negative Staphylococci (CoNS),will also yield fluorescence on the NucAP™ Pyoderma agar plates after overnight incubation. The NucAP™ Pyoderma Tri-plate has not been evaluated as a tool for the identification of bacterial pathogens and is not intended for such uses.

Wear clean gloves and open plates on a clean surface such as a bench-top wiped with 70% ethanol. Inoculate the media of each compartment of a fresh NucAP™ Pyoderma Tri-plate with a specimen swab. To avoid transferring antibiotics between compartments, use a different part of the swab for each compartment (i.e., rotate swab ¼ turn prior to inoculating each compartment), and inoculate the Gram-positive compartment (compartment III) first. Place the plate in a 37 ⁰C incubator for 8 hours. (When using the blue light boxes, orange-colored blue-light-blocking safety glasses are recommended as additional protection from inadvertent exposure to the high intensity light emitted from these devices.) With the light switched off, place the plate on the surface of a blue light box such as the TruBlu™ 2 Blue/White Transilluminator of Edvotek (recommended) and lower the translucent orange screen over the plate. Turn on the blue light and view the plate, noting the presence or absence of green fluorescent spots in each of the 3 compartments. If the plate will be incubated further, limit the light exposure to ~1 minute and return plate to incubator within 5 minutes. Turn off the light prior to lifting the orange screen and removing the plate.

Note that rare, slow-growing strains of species such as S. aureus and S. pseudintermedius can produce fluorescence that only emerges after 7 or more hours. These strains will typically exhibit smaller green fluorescent spots at 8 hours compared to those produced by the more common strains. Samples that yield green fluorescent spots on the Grampositive (compartment III) at 8 hours that are substantially smaller than those shown on the images below without corresponding green fluorescent spots on compartments I and II should be incubated for an additional hour and then viewed again on a blue light box for more accurate interpretation. Finally, cases in which the initial fluorescence is only visible after 10 hours are generally the result of coagulase-negative Staphylococci, such as S. epidermidis.

Viewing the plates on a blue light box after overnight incubation is optional, but can provide additional information. The fluorescence pattern after 19 hours of incubation is generally more diffuse and higher in its intensity versus that seen at 8 hours. Gram-positive bacteria of non-Staphylococcus species, such as Enterococci, may produce colonies on the agar visible after 19 hours of incubation. These colonies generally produce limited fluorescence that is confined to the colonies themselves, without an associated diffuse signal in the media. The presence of a colony without associated diffuse fluorescence in the surrounding media is an indication that the bacteria are a non-Staphylococcus species.

In some cases, various types of debris present in specimen swabs can yield fluorescent spots on the plates. This fluorescence can be distinguished from the enzyme-derived fluorescence that results from growing bacteria by its shape and static nature as debris-based fluorescence will generally be unchanged in intensity and shape over multiple imaging periods. If this is a recurring problem, consider viewing the plates immediately after inoculations. Fluorescence visible at this initial time-point can be assumed to be the result of debris.

Upon delivery, store NucAPTM Pyoderma Tri-plates at 4 ⁰C protected from light up until the expiration date marked on the package.

Information on Nuclease Probe Technologies’ US patents is available at: https://nptrapidtesting.com/

The sale of this product is governed by Nuclease Probe Technologies’ “Terms and Conditions of Sale” which is available at https://nptrapidtesting.com/pdfs/NPT-Terms_and_Conditions_of_Sale_v1.pdf